Do you know the 'Rule of 72'? If you divide 72 by the interest rate you get the approximate number of years it will take for an amount at Compound Interest to double.

This formula helps us to picture the implications of Compound Interest over the lifespan of a loan. Imagine somebody getting for instance a $100,000 mortgage at 10%; the debt will rise to approximately $200,000 in 7 years and 2 months!

By the way, do you know what Compound Interest is?


Do you know that Money is created as Fiat Money? Why then do we have to pay Interest on it?


Yes, believe it or not Money is created as Fiat Money (aka out-of-nothing – See 'How Is Money Created').

That obviously makes us wonder why we have to pay Interest on it. Such a question raises a few more that link the Rule of 72 with the concept of Interest and Usury.


Do you know what 'Usury' means? Has the concept of 'Charging Interest' always been accepted as a common practice?


Usury comes from the Latin word 'usura' which means Interest. There you go!


Despite Usury’s current meaning as the practice of charging 'excessive' or 'illegal' Interest on loans, its original sense was 'the charging of Interest at any rate'. We are not even making reference here to the type of interest, whether it is 'Compound' (i.e. The 'Rule of 72') or Simple. We are associating 'Usury' with the concept of 'Interest greater than Zero'. That's it.


With respect to the second part of the question, the concept of charging interest on loans has not always been accepted.

In fact, the early centuries of Christianity brought up for instance a ban on the practice of charging interest. ‘Usury’ was considered immoral. See for example, 1745 Pope Benedict XIV’s ‘Vix Pervenit - On Usury and Other Dishonest Profit’ Encyclical, explicitly condemning the said practice.


On the same line, let’s recall that Islam has considered ‘Usury’ (i.e.‘Riba’ in Arabic) strictly prohibited up to this day.

'Usury' in its original sense has indeed been denounced by philosophers and world leaders at different moments of history.


Let’s take a look at what some have said to that respect:

'Now, that is what Henry Ford wants to prevent. He thinks it is stupid, and so do I, that for the loan of $30,000,000 of their own money the people of the United States should be compelled to pay $66,000,000 — that is what it amounts to, with Interest. People who will not turn a shovelful of dirt nor contribute a pound of material will collect more Money from the United States than will the people who supply the material and do the work. That is the terrible thing about Interest.'

'It is written in the Book of Exodus (22, 25): 'If you lend Money to any of my people who are poor, do not act like a moneylender and require him to pay Interest.'

He who takes Usury for a loan of Money acts unjustly, for he sells what does not exist, and such action evidently constitutes an inequality and, consequently, an injustice… It follows then that it is wrong in itself to take a price (Usury) for the use of Money lent, and as in the case of other offenses against justice, one is bound to make restitution of his unjustly acquired Money.'


In 1985, Sir Harry Page wrote the book ‘In Restraint of Usury: The Lending of Money at Interest’ about the first legalization of Usury by Henry VIII in 1545.

Among others things the book pointed out the negative effect that Usury (aka Money at Interest) had on providing quality public services and the resulting extreme poverty generated.


Alexander Del Mar (1836-1926) was one of the greatest monetary historians of the XIX century.

He wrote against the Economy theoreticians Adam Smith, David Ricardo and Karl Marx who preached in favor of Fiat Money (Money created out-of-nothing as a Debt).


Do you foresee the implications of the Rule of 72 and in general of charging Interest on Money with respect to the Debt problem at all levels?


Let’s take the Public Debt as an example. As a rough figure, over 80% of all personal tax Money in the world is used just to pay the Interest on Public Debt.


The paradox is incredible! The U.S., supposedly the richest country in the world and with the largest production, is also the most indebted; its Public Debt reached $14.3 Trillion US in August 2011! The country’s economy was at the brink of collapsing. It was 'rescued' by Congress, by raising the Debt Ceiling (in other words allowing the government to get into more debt).


Can you imagine such a Debt doubling at some point based on the Rule of 72?

That reminded us about the following story.


Have you ever heard about 'The Five Shipwrecked People on a Deserted Island'?

(What follows is an adaptation from the original parable that is on Louis Even’s book 'The Money Myth Exploded'):

Among the five shipwrecked, one was a builder, another one a chef/baker, the third a tailor, the fourth a shoemaker and the fifth a doctor. A few days later a sixth survivor came to scene; he was a banker who was able to maintain afloat his safe-box with supposedly a 'fortune in jewelry'.


The first five had started to trade their labor and since they did not have Money to pay each other they accepted the banker’s offer to 'lend' them 'a sort of legal tender' that he had written on paper. He lent '$100' of such 'money', at 6% interest, to each individual.


By the seventeenth year none of them had Money left (there was no more Money in circulation on the island); each one was still owing $100, and the banker would have had the 'right' to seize their properties unless the five shipwrecked would not have accepted the banker’s 'generous' offer to lend each one another $100!


As in the parable, we take for granted that Money has to come to life as a Debt. Consequently, it is 'imperative' to have an ever-growing debt in order to 'sustain' the financial system, otherwise it would collapse.


How the Rule of 72 applies in this parable's case?


Let’s tweak our story a little bit. At the end of year one and in order to avoid reduction of Money in circulation, the five shipwrecked decided not to pay the Interest but to 'borrow' that Money from the banker (each one’s Debt was now $106). The banker simply informed them that the additional Interest on the $6 was 'only' 36 cents (6% of $6).


The Rule of 72 makes itself obvious on year 12 when each one's Debt doubles.


Of course, the five men did not know about the Rule of 72; they were still OK, thinking that they could handle such Debt. The question is, would they still be thinking the same way after 30, 40 or 50 years of carrying such an unsustainable Debt?


To illustrate what is going to happen to each man’s Debt, how the Rule of 72 applies, and the effect of Compound Interest in this particular example, here is the following table and its corresponding chart. 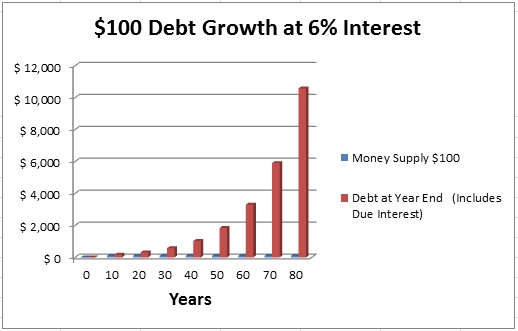 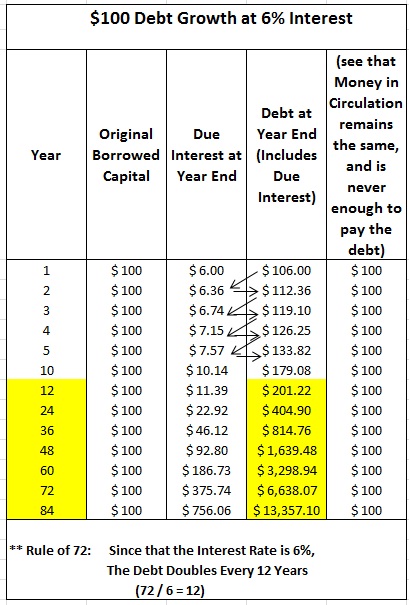 Let's comment on our story and on the charts, thus wrapping up what we have said.

1. We observe that while both the Principal and Money in circulation are still $100, Debt behaves as a moving target: The more we try to pay for it the more there is a need for getting in more Debt.

When you are granted a loan, the bank creates the Principal but not the Interest; yet the bank is implicitly asking you to pay more Money than was created.

Since it is impossible for you to pay with Money that does not exist, someone else has to get in Debt (i.e. acquire a loan); that way a new Principal is generated, creating the false illusion that Money supply 'increases'.

It is a false illusion indeed! What in reality happens is a never ending Money deficit: Your need along with other's people need (including, corporations and Government!) to pay Interest generates an imperative for more and more loans, thus augmenting the Economy Debt level.

2.Another observation is that Debt's increase is moderate at the beginning but, based on the 'Rule of 72', it grows faster and faster (aka exponentially) as time progresses. This is in fact the pattern with which Debt worldwide is growing!

As a matter of fact, between 1981 and 1989 (Ronald Reagan's presidency), the U.S. national debt jumped from under $1 trillion to $2.6 trillion. As a result, the U.S. switched from being the world's largest creditor to the largest debtor country.

The 'Rule of 72' is evidenced again in the recent history of the U.S.: Its national debt has more than doubled since year 2000.

3.On the other hand, as in our story’s second scenario, you may borrow the Interest as well; yet as we saw, that does not solve the problem. On the contrary it only makes the issue worse since you get more indebted and at much faster pace.

> Why is it that Money needs to be generated as a Debt and that we have to pay Interest on it?

> When Interest is applied, why do we have to pay Interest on Interest? (in other words, why does Interest have to be Compound and as such, doubling at much faster pace based on the 'Rule of 72'?)

> Where is in fact Debt leading the World?

> And how much is the Debt issue putting a burden on the efforts to overcome Poverty?

These are major concerns triggered by our current financial system based on 'Money as Debt'.

In essence, we had started by picturing the Rule of 72 and ended up facing the calamitous implications of the current 'Money as Debt' system as a major responsible of Poverty.

As the shipwrecked, we all live the false illusion that it is OK to pay Interest on such Fiat Money!

Return To The Top Of This Page

Return from The 'Rule of 72' to 'How to Fight Poverty'